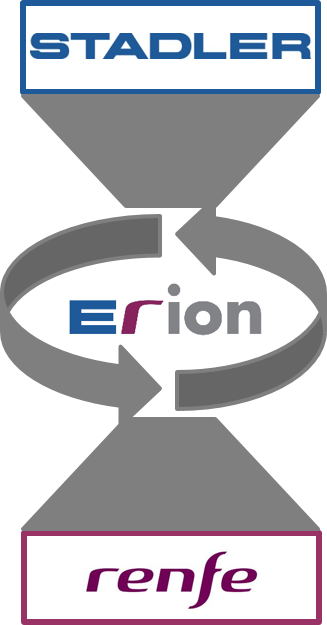 The Company’s Board of Directors is evenly divided, with one-half of the members designated by STADLER and the other half by RENFE. This arrangement allows the two shareholders to share the management of the company’s operations while taking advantage of the synergies created by the manufacturing, technological and maintenance experience of STADLER and the maintenance expertise and resources of RENFE.

In Spain, the rail maintenance sector is regulated by law in Order FOM/233/2006. In July 2007, ERION Mantenimiento Ferroviario was officially authorised by the Directorate General of Railways to perform rail maintenance operations on the following classes of materials:

ERION Mantenimiento Ferroviario, in keeping with its Business Commitments, adheres to the procedures contained in the standards ISO 9001, ISO 14001 and ISO 45001.

In 2016 Erion obtained the Certificate of Entity in Charge of Maintenance (ECM), within the European Union, in conformity with Directive 2004/49/EC and EU Regulation No 445/2011. The Certified Maintenance Functions are:

At present, ERION maintains a fleet of more than 150 locomotives that yearly run 15.000.000.- kilometers, and started in 2015 the activity of passenger self-propelled trains maintenance. ERION provides Rolling Stock Maintenance Services to 2 public operators and 13 private operators, who operate across Spain, Portugal, France, Belgium and Germany.